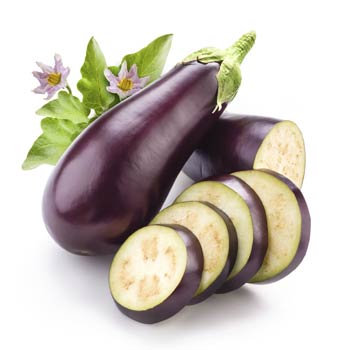 Select an eggplant that is firm and with a calyx (the leaves on top) this is fresh and green (not brown or dry). Avoid eggplant that has cracks or discolorations.

Select an eggplant that is firm and with a calyx (the leaves on top) this is fresh and green (not brown or dry). Avoid eggplant that has cracks or discolorations.

Here are a few tips about cutting eggplant.

Salting: Traditionally, salting removes the bitterness and some of the water from an eggplant. Salt an eggplant about 1 hour before cooking. Slice the eggplant either lengthwise or across into the desired thickness for your recipe. Sprinkle each slice with salt and set aside for 45 minutes. Before cooking, rinse the eggplant well, squeeze gently, and dry with lint-free cloth. This process will alter the nutrition information (below) by increasing the sodium content. Fresh eggplants from farmer markets (especially Asian and Italian eggplants) tend not to be as bitter as supermarket eggplants. Salting these less-bitter eggplants is unnecessary.

Raw: Some people are sensitive to a compound in raw eggplant. Raw eggplant is also bitter.

Pan Fry: Slice egglplant to desired thickness. Sprinkle with salt and let sit 20 to 30 minutes, then rinse with water. Combine 1 beaten egg and 2 or 3 tablespoons of milk. Dip eggplant slice in flour, then in egg mixture. Dip again in flour, season with salt and pepper, then fry in small drop of oil until browned on each side.

Bake Halves: Cut off the tip of the eggplant, and then cut in half lengthwise. Salt the eggplant as explained above (unless using Italian or Asian eggplant, then no salt needed). Heat oven to 350°F, and place the eggplant on a baking sheet. Drizzle with 1-2 tablespoons of olive oil and sprinkle with salt and pepper to taste. Bake for 20 minutes or until edges are brown and crispy.

Bake Whole: Heat an oven to 350°F. Prick unpeeled eggplant with a fork and lay on a cookie sheet. Bake until the eggplant is soft and has collapsed. Scrape the flesh from the skin. Use in any recipe that requires pureed eggplant, like baba ghanoush.

Grill: Heat grill. Peel eggplant, and cut lengthwise into slices that are ½-1 inch thick. Brush one side with oil and lay onto hot grill. Brush top side with oil and salt. Flip after about 2 to 3 minutes. Continue to grill until the slices begin to look glossy and begin to bubble a bit. Grilled eggplant can be used as a sandwich stuffing, eaten with pesto and cheese, used in eggplant Parmesan, or in most eggplant recipes.

Roast: Heat oven to 475°F. Cut eggplant into 1-inch cubes and drizzle with 1-2 tablespoons olive oil, and salt and pepper to taste. Spread out in a single layer and bake until golden brown and tender, about 25 to 30 minutes. Turn at least once while cooking.

Sauté: Cut egglplant into cubes and cook in a skillet with 1-2 tablespoons of olive oil over medium-high heat. Cook eggplant until it begins to collapse and become soft. Add onions, garlic, tomatoes, and/or peppers to taste. NOTE: Eggplant tends to absorb oil, so be careful not to add too much. Using a nonstick skillet can help. Use sautéed eggplant in recipes for ratatouille or caponata, or use as a pasta topper.

Store eggplant in a cool spot away from direct sunlight, and use it as soon as possible. You may also store eggplant in a refrigerator crisper  up to 5 days. Do not use if you see soft spots or if the internal flesh has become beige or discolored.

The first eggplants grew in India and were white and shaped like an egg.

Follow the safe food guidelines for all fresh produce.

Scan the QR code below to view this page on your mobile device.